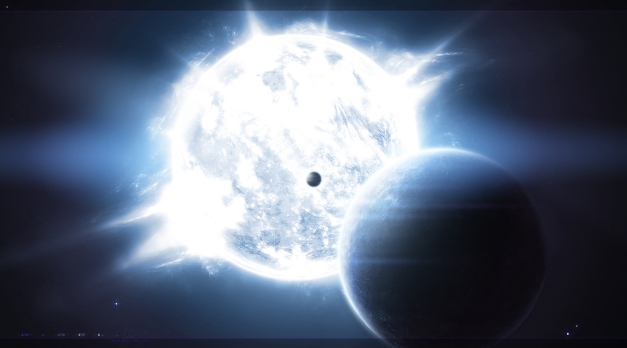 Every act of creation is first an act of destruction. — Pablo Picasso

“Who has the hydrogen?” the Big Guy asked absentmindedly. “I smell something burning.”

The Big Guy was pruning a collection of what would one day be called roses and other assorted flowers. With every clip of his shears, insects spontaneously spawned and flew away to pollinate the newly created gardens in the East Wing of Heaven.

Michael dropped down after making a lazy, what will one day be called an Immelman, and landed in a three point stop in front of him. His six wings tucked back and only a few stray feathers ruined what would have otherwise been a perfect landing. Looking majestic he strode up to the Big Guy and made a gesture of genuflection.

“Azrael has it. He’s been experimenting with it again. He keeps saying it should be able to do more than just sit there.” Michael’s voice was high pitched and squeaky, far from the basso profundo he normally used to make himself seem more impressive. He wrinkled his brow in frustration and continued “some of his more recent experiments have caught fire and we were reluctant to tell you we couldn’t put them out. The fire has spread across the entire West Wing.”

The Big Guy smiled as he was wont to do whenever they discovered something new to them. It appeared they have also discovered a side effect of helium too. Lucifer’s doing I’d bet.

Michael genuflected again and from the kneeling position shot up into the sky. He going to pummel Lucifer as soon as he can find him. No sense of humor that one.

The Big Guy opened himself up to the entirety of Heaven and saw the event and Azrael taking notes. He had given up trying to put it out and had begun studying it. Though his project had already consuming the West Wing, he found the light pleasant and warm and thought it might be a good idea if it were a bit further away. Before he could do anything, Lucifer had already thrown some turf toward the ball of burning hydrogen.

Lucifer’s throw was, as most things angelic, impressive. It whirled around the ball of burning plasma subject to an attraction caused by its great mass. Azrael smiled and scribbled faster. Lucifer looked around and bowed to no one in particular.

The Big Guy thought it was good. “Azrael would you care to explain what happened?”

“Lucifer happened, Lord. I was staring at the Hydrogen you left about and couldn’t figure out what to do with it. I had been compressing it into other shapes and discovered as I compressed it, it released energy and changed its form. Then Lucifer came by and thought it might be able to do this by itself if there was enough of it. So he gathered it and true enough it became” and he pointed with his central wing “this thing.”

“Lucifer?” The Big Guy had no hope that Lucifer would accept any responsibility for what happened as a side effect of his help. But he hoped Lucifer had learned something burning down a section of Heaven.

“Lord?” Lucifer’s voice was a dulcet tone, magical in its cadence and tenor. No affectation on his part, it was as beautiful as he was. “It just seemed to be the thing to do. He was doing it one atom at a time. It would take forever to make anything that way.” Lucifer smiled and the Big Guy just shook his head and squeezed his temples, feeling another one of his headaches coming on.

“Azrael, you may continue your project. Outside of Heaven, if you please. It is becoming unstable and could explode suddenly. Lucifer you can join him and clean up after the mess. After that you can continue helping him with what develops. Report back when you have something more interesting to show me.”

“Yes Lord,” they chimed in unison.

“Which one of us is going to carry the…” they both turned toward the Big Guy.

“Star. We’ll call them stars.” It just sounded good. The Big Guy was insufferably pleased with himself.

“Star, and which of us is going to move all of this hydrogen?” Lucifer complained. Despite being one of the Big Guy’s favorites, he was petulance personified. The Big Guy knew in the future there would be fallout from his temperament.

Since they would be making things he figured he’d better round the project out. “While you’re making stuff, compress the hydrogen and allow it to form other bodies around the stars so they don’t get lonely.”

The Big Guy waved his hand and the hydrogen was gone. “Since you’ve decided we could make things from it, I’ve created a surfeit of it. It’s everywhere. Remember it’s volatile and thanks to Lucifer, self-organizing.

“But Lord, I didn’t change it. Just how it organized itself. Maybe I tampered with a few of the fundamental constants out there but you had not assigned anything…”

“And created a host of fundamental forces which now have established themselves everywhere.” And his work was always clever.  Inventive, even, but the Big Guy wished Lucifer wasn’t so inclined to work without asking whether something he wanted to do was actually a good thing.

I’m going to miss him when he’s gone. “Get the others to help you when they have the time. There’s a lot of sky out there.”

“Yes, Lord, we’ll take care of it.” Both Angels streaked away into the darkness of Heaven’s sky, coordinating the formation of hydrogen into plasmic spheres of incandescent gas. Slowly the darkness of Night gave way to a gentle silver shimmer.

The left side of Heaven was lit with an even glow as Azrael placed the stars in a well-distributed, if a bit boring, pattern. I’ll have someone come out and add a bit of variety to his work — maybe Asmodeus won’t mind.

The right side of Heaven was filled with a variety of stars — different sizes and colors. A hallmark of Lucifer’s inner nature, always playing with fire.

Then one of the stars unexpectedly exploded and the Big Guy heard the shockwaves of another one of Michael and Lucifer’s epic conflicts.  The supernova’s light filled the sky in every direction.

And there was Light, and it was good.