Posted by Ebonstorm on October 24, 2011
Posted in: Character Bio. Leave a comment 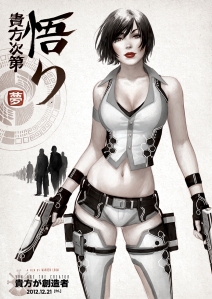 Biyu Shēngguāng is a member of the Conscientia, an amalgam intelligence housed in a humanoid body. Her body was designed to be both a pilot and a scientific support operative for technologies used by the Resurrection Frame. Any successful covert operative utilized by the Corps is assigned such an android because of their durability, programmability and longevity. Since Resurrection Corps members are potentially immortal, it was decided they would be paired with android companions who could work in and survive their potentially dangerous lifestyles. By the standards of the Imperium she is considered a sentient being and afforded all of the rights of any other Imperium citizen. Her work is considered contractual and she is able to leave her employment at the end of any contract period. She has worked for the Majoris for nearly twenty years and is due for a contract renewal soon.

Being fully combat capable, her preference is for dual pulse pistols, custom-made, capable of being used fully automatic and tied to her visual cortex for pinpoint accuracy up to 100 meters. She can also use any human compatible weaponry found in the Empire. She prefers ranged combat and practices regularly to maintain her precision. She is capable of using dual flex swords as well and is an above average hand to hand combatant. As an Alpha-class sentient, she is capable of both adaptation and learning and is constantly improving her skills and interests. In her off-time, she is a know abstract artist in a variety of mediums, including virtual realm development, sculpture, and fractal arranging and modeling.

Biyu is over one hundred years old and despite her technological origins, appears to be a human female of indeterminate age. She has mastered human mannerisms and affectations. Using stealth technology, she can physically pass for an anatomically correct human under most modern scan technology and can pass a physical inspection as well. She has had three previous contracts as a Resurrection Corps pilot/companion, but this one has been both her longest and most enjoyed contract.

Character inspired by the artwork of Warren Louw – will appear in my novel Revenant: Resurrection – May 2012