Posted by Ebonstorm on October 24, 2011
Posted in: Uncategorized. 2 Comments 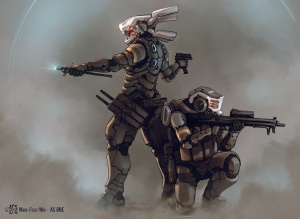 Thomas Wilks is a member of Pan-humanity – the collective of races that escaped Earth in the year 2475 having been rescued by the Sjurani during the Great Exodus of Man. The fate of Earth is currently unknown and return is proscribed under Galactic Law. As a Pan-Human, he has been genetically modified to be the peak of human evolution. He also has several genetic patents that are not seen in most Pan-Humans.

In addition to his superior strength, disease resistance and endurance, his parents further altered him to survive on heavy gravity worlds with increased lung capacity and maximizing his musculature and bone density using organic fullerenes. His parents also ensured his cells were hardened to radiation allowing him to work and live on radioactive planets, planets without sufficient magnetic fields and/or with several aliens species known to emit low level radiation level include the Bel-han and the Mariovel.They expected him to join them in their planetary explorations as scientists of the Empire.

Thomas is highly intelligent, as are most Pan-humans, but unlike his parents, he focused his efforts and interests on the military. He is well-versed in combat both with and without an exo-skeleton. He has worked as a support agent for the 454 Regiment of the Corvan Assault Squad providing heavy weapons support and defensive support operations.

In his early years, he excelled in the military but was prone to exuberance. During time as enlisted infantryman, he was reduced in rank twice. Spent fifteen years after second demotion in the military after achieving high rank and having served on several important campaigns. He served with distinction in five high stress campaigns against aliens during the First Galactic War as a tactical support technologist, heavy weapon specialist and light exoskeleton soldier. Has also done time as a light mecha pilot, drop jockey and AI support technologist.

Thomas was recruited into the Resurrection Corps as an inductee after genetic testing indicated he would be able to handle the genetic bonding and nanotech enhancements. Spent three years on assignment during adaptation training. Received a Resurrection Frame, (a superior military exoskeleton designed as an advanced life support system) capable of multi-function military combat and has the ability to restore a pilot in the event of his death on the field of battle. He completed the training in seven years (a record) and with only a single death on his training record.

He was recently recovered from a two year operation in which all of his battle-brothers suffered the Final Death and were unrecoverable. He died two dozen times on assignment, and his current mental stability is in question. The Resurrection Frame and AI systems are in overhaul in a secret facility on Lorissi where its nano-tech core components are sourced.

He hails from Shai, a prosperous, but highly socially stratified, outer rimworld system, where many Pan-humans settled once galactic travel was re-established after the First Galactic War. Shai is a technologically advanced world of the Empire with a Corvan dictator and a diverse non-human population. Shai is a commerce world, known for its manufacture of nanoscale computation systems. He was born on the Gaia-moon, Harata II in the Toranor star system,  where humanity settled after being ejected from Earth, three hundred and fifty years ago. His parents, xeno-biologists, migrated to Shai when they learned of other humans, not born on Earth could be found on Shai and wanted to investigate this potential chance of convergent evolution. (It turns out, it was not convergent evolution, humans had been stolen from Earth, thousands of years ago, during the 13th century for fear the species would die out during the black plague. These settlers were from Africa, South America and the North American continent. His parents were killed in the food riots when he was still a young adult. He was forced into conscript gangs working the sewage treatment facilities until he was old enough to escape and join the planet’s military.

About the Artist: The artist is named Anthony Scroggins and can be found on deviantART. I found the piece I used for Resurrection Blues called Blue Planet because it showed a powered armor user approaching a factory, much like the story did. I considered it serendipity. I later found the deviation “As One” used in this piece and liked it.