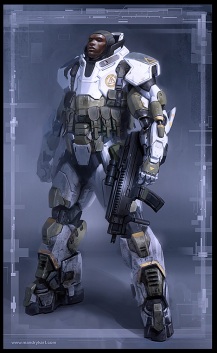 Her breathing was shallow and slowed. I wasn’t sure whether the patch would hold. The round had gone clean through but the bleeding was terrible. We had already lost our heavy exo-armor on the infiltration, and were down to our stealth suits, a black under-armor with a low radiation profile and anti-ballistic properties.

We were fifteen miles behind the Henrenkai lines. Our dropship was shot down and we were hauling the Henrenkai hive pupae in our ruck-sacks. Our orbital bombardments had worn this world down, but there were still too many worlds that we had lost to the Henrenkai and this was a vulnerability we could not lose. They only spawned once every two hundred years on a tiny number of their inhabited worlds.

Intelligence reports gained through psychic torture revealed which worlds were spawning and how soon. In an act of desperation, Command bombed five of the six worlds and destroyed them completely, kill untold billions of humans and Henrenkai. On this one, they planted us. An extraction team, trained for infiltration.

There were ten of us. We were creche-raised, five males, five females. Genetically created from the best DNA humanity had to offer, we were stronger, faster, smarter and trained as commandos. We were given psychic gifts to bind us together. We could sense the presence of each other over vast distances, we could read each other’s thoughts, when allowed. It multiplied our fighting prowess by coordinating our attacks. We had the firepower of a regiment; perfectly attuned. But it also made it so we could never touch each other without protective clothing. The fusion of our minds could destroy us both.

We were raised together, Califer and I, and I loved her more than anything. But she could never know. It was forbidden. Creche-commandos were allowed to intermingle with any other military forces except other commandos. This was for our own protection.

In all other ways we were as close as two people could be. We trained together, worked together, and have been on nearly twenty sorties without any incident. Our team was one of the most highly decorated commando units in Creche-Command history. Now except for me, High Sergeant, Doro Vanimen and High Sergeant, Califer Prin, our tactical squad is dead. We had never infiltrated a Henrenkai hiveworld before. Our intel was simply insufficient to the task.

“There is no way… I can make it like this. You have to complete the mission.”

“I am not leaving without you Calli.” I was trying to sound casual.

She looks at me with those beautiful green eyes and I knew I would do whatever it took. If I had to carry her myself. We are getting off this rock. “Set the pace.” She picks up her maser, and stumbles.

“Leave it.” If it comes to us having to fight again, we’re done, anyway.” She drops it, relieved. I set a brisk pace and I can hear the status reports in my earbud. They are about to begin shelling again. She is keeping up, but her pace has lost the light step I loved so much about her.

When we were young, she was always the best of our battle-sisters in fighting and dancing and I knew right then, there would never be anyone else for me. We would train in our nightsuit armor, skin tight and I marveled at her perfection, her essence and her ability to totally kick my ass, even though I outweighed her by thirty kilos. When we were done, we would sit back to back and rest and talk, her hair tickling my neck, smelling of sweat, and nothing was ever better than that.

Her nightsuit had sealed up around her wound and pressure sealed the injury. It was a railgun round, so fast it simply overwhelmed our bulletproof nightsuits. We got hit by one of their skyships and we lost Carlto, and Marina then. Multiple hits tore them apart. She got hit as we jumped the last wall and then ran to the first drop point. I covered her when the wreckage of the dropship fell down around us.

“Calli, I have something I want to tell you.” I could feel the larvae moving around in my pack. It distracted me and I almost lost my nerve.

“Not now. Have to focus on running.” Her temperature was elevated. Her body was going to go into shock. She is running on pure will.

I have to tell her now. “There has never been anyone else for me but you. Do you understand that?”

“And you know that’s forbidden. It is the only rule we have never broken. I have had others, haven’t you?”

“No. Never.” She seemed almost shocked at my words.

“What do you expect me to say?” She stumbles and falls to the ground. “That I am happy that you love me? That I am willing to die for you and I to be together?” She gasped in pain.

I reach down to help her to her feet. She slaps my hand away at first.

Then she takes it and I heave her to her feet. She throws her arm around my back and I put my arm around her waist. We start running again. The sound of the shelling has begun and is slowly creeping up behind us. The explosions echo around the strange rock formations common on this world.

I look back over my shoulder and my optical enhancer detects movement about three miles behind us closing fast. The shelling is slowing them but they are not stopping. I think they know what we are carrying. Their larval Queen. The fate of their Race. The only ransom that they will respect.

“We have to move, Sergeant. Dammit, run for all you’re worth. We can fight about this when we get home.”

And for six long minutes we are running. She has let me go and seems to have found a second wind. For a few seconds, I am struggling to keep up with her. We are getting close to the dropship coordinates. Less than two miles.

Then I hear the buzzing. Their skyships, giant insects with forty foot wingspans, carrying two of them on their backs. They are using their chemical weapons and splashes of acid rain down around us.

I look back for a second and I can still see them coming. Its half a regiment now, and a shell destroys thirty or so, but they do not stop to care for the dead. They are here for their Queen.

“Bravo Six, we are nearing the extraction point.”

“Understood, we are inbound in two minutes. The area is hot, we will not be landing.”

She looks at me. And then looks around. “You have to go. I can’t do a hot pickup.”

“All of the Human Worlds rest on your back now. What’s more important, me or them?”

“I would let them all burn for you.” I meant it.

“Well, I won’t let you.” She snatches my maser from my arm and kisses me on the lips.

“GO!” Her telepathic command blasts through my mental shields like they were not there. She was my entire universe in that infinitely long second. All that she was, all that should could be was inside of me.

She ran to a rock for cover and I turned and ran faster than I had ever run, tears flowing down my face. I could hear the maser, one of the fliers goes down. Then another. And another. She was decimating them. Then it fades. And soon after stops.

I see my dropship coming in dragging a line and it’s gunners shooting in every direction. I have to time this just right. They will not be able to come back. They are being pursued in the air. Acid rains down around me but all I can do is see her face. The dropship pulls up to avoid a missile and the line leaves the ground. I leap and I feel her directing my movement, arching me.

I hit the line, grab on and the dropship rises fast, speeding away from the planet’s surface, nearly tearing my arms from their sockets. They don’t dare shoot us down now.

I am tempted to hurl the pack from the ship as we pull away. She stops me.

Save them. You can save them all.

But I couldn’t save the only thing that matter to me; you.

I will always be here with you.

As our ship streaked away into the armada, I looked at the planet. The final resting place of all that I loved, my family. My creche. My Calli.