Posted by Ebonstorm on October 28, 2011
Posted in: Character Bio. 1 Comment 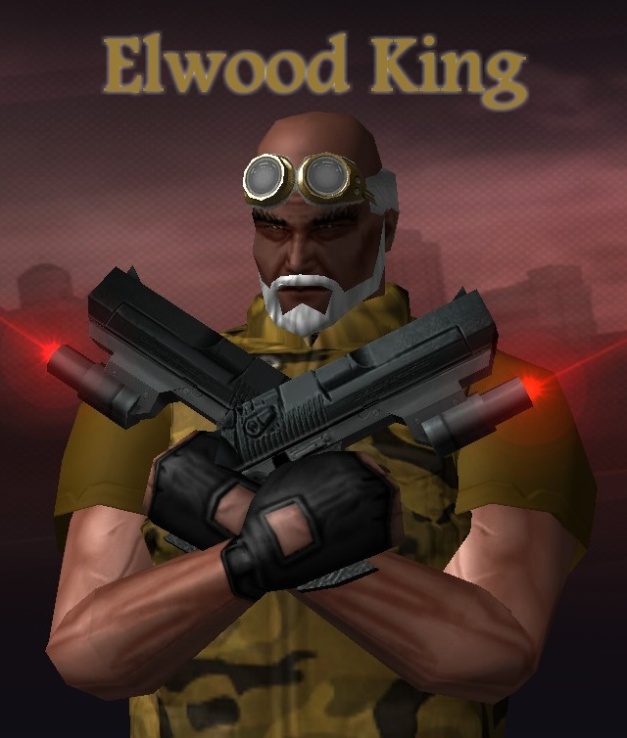 History: Elwood King began his career first as a military soldier for eight years before leaving the military to attend college for a career in conservation and forestry. Elwood King was a forest ranger at Yellowstone Park for thirty years before retiring. He was enjoying his retirement when an alien invasion began to replace the Earth’s ecosystem with a toxic and deadly new series of plants and later animals. Having moved to New York to be with his aging father, he was visiting a family member in upstate when the Arrivals made the first attack against humanity. Rescuing and later marrying Martha, he and his family have become nomadic scouts working with what’s left of the federal government connecting enclaves of humanity that remain active from the invasion.

Today: Elwood has been chronicling the Arrivals, their species, their behaviors and returning that information to the the remaining federal scientists who are creating potential models on the growth and development of the alien Arrivals. In the beginning of the invasion, Elwood was horrified as the Earth’s biosphere was being replaced but in spite of himself has found a form of alien beauty in the Arrivals and their multitude of forms and niches on Earth. Recent discoveries have lead everyone to believe there is a new transition taking place among the aliens. What that entails for Humanity needs to be discovered now, and Elwood is commissioned by the President of the Eastern United States to discover what has been happening in the Gulf of Mexico, a concentration of the creatures and the site of a new creature, never seen before.

Psychological Profile: Elwood King has grown weary watching Earth as it struggles to deal with the threat of the Arrivals. He does not believe humanity nor the Earth as a whole can survive the invasion of the Arrivals. While advocating humanity continue to organize themselves, he has a personal belief that humanity must learn to adapt to the Arrivals or face extinction. This puts him at odds with his wife and the leadership of the government.

Story Description:
In The Arrivals: Tales of A New Earth, an alien invasion has occurred, but unlike anything imagined. New life has landed on Earth and is replacing everything before it. Humanity had expected alien invaders to arrive in terrible space craft, armed with the most sophisticated of weapons. When they came, we thought we would have a chance against them. We never even knew they were here and had lived here for decades, perhaps even centuries, masquerading as trees. When the meteor swarms began, we had no idea, the invasion had begun, in earnest.

The Arrivals: Tales of a New Earth features Elwood King, a sixty year old former forest ranger, wandering this new world, secretly in love with it alien beauty and fecundity. He sees a dying world reborn with new life. His more practical wife, Martha who would love nothing more than to eradicate the alien menace to the last spore.

Staying on the move, he and his family experience this new world on the front lines, sharing information for temporary room and board. When they rescue the President of the United States from the ruins of the Pentagon, they discover the Arrivals have continued to change the Earth to an unknown purpose. She conscripts Elwood and his family to guide her West to the center of the contagion and the answers they are all seeking.

Tales of a New Earth is broken down into four Seasons, each bringing new threats, challenges, beauty and terror as the Arrivals transform the Earth to an unknown purpose. Mankind, decimated, struggles to find a place in this New World. Humanity as we knew it is doomed, the only question is can we understand what is happening in time to resist?

Reading What Others Don't