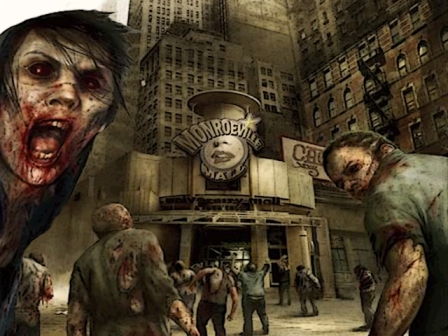 a tale of hub city

His accusation burned me. I was shaken by the force of it. I couldn’t find my voice.

“Goddammit, Karen. LA is less than fifty miles from us.” He stomped off whipping his hands thorough his tangled hair. He only did that when he was really nervous. “We have managed nearly seven hundred miles from Oakland through zombie-land and you wait until we are fifty miles from LA and a cure to get bit?”

I looked down, sheepishly and turned away from him. I whispered. “It’s just a scratch, maybe it won’t take.”

He grabs my arm and pulls up my sleeve. “Look at it. Smell that? You’re gonna turn. It’s just a matter of time. The question is when did you get bit?”

That was the question. I think it was five days ago in Santa Cruz. I can’t remember. So hard to remember anything lately.

There were six of us who left Alameda about a week ago. Now there was only me and Darren.

Six months ago the world was different then. Who knew so much would change? I remember how we had always joked we could survive the zombie apocalypse. There were books on the subject and even the CDC website had used a simulation of a zombie outbreak to teach people how to behave and react to a pandemic infection. People laughed and thought it was a novel idea.

It was considerably less funny when it happened.

The zombie survival handbooks never tell you about the silence; the palpable, maddening absence of people sounds, anywhere. When your world dies from a pandemic empty streets mock you with the idea that once millions lived here.

We had a contingency plan that started as a joke. Our military buddy, Claude, always ranted about his top secret clearance. We had joked about how paranoid he was. He talked about government secrets and rare disease stockpiles at the CDC.

He said one night, we should put a survival stockpile together, but it was hard to take him seriously, at first. After his last tour, he came home and looked more haunted than I could ever remember. He made us promise to start the stockpile and wouldn’t stop talking about it. He made a list and it took us about three months to get everything. We even ended up with guns. Claude took us to the range and taught us to use them. He was serious.

The last thing he said was when the warning came, fill every container, and both bathtubs with as much fresh water as we could and hunker down. We had enough food for three months.

We never thought we’d use it.

The end of the world looked like a pack of cigarettes. The news said it was a bio-weapon and had been released at LAX. It was a virus designed to destroy the reasoning centers of the brain and turned people into ravaging beasts driven by their amygdale; the part of the brain that dealt with fighting, fear and hunger.  The infected transformed inexorably from people we knew into killing machines without fear, without mercy, without memory.

In ten days the victims were transformed into a flesh-eating cannibal capable of transmitting the disease via a bite or scratch like a komodo dragon did to its prey. In two months 750 million people were infected. And it kept spreading.

Services were slowly lost. First garbage, then electricity, then water. We saw the infected from the windows, heard the screams from our neighbors. We kept our weapons close because we saw firsthand what the infected were capable of. One afternoon, our next door neighbors, the Franklins, were torn apart and eaten right on the street in front of us.

Our food ran out. Three months and the infected were still moving about. Our forays into town returned with less and less. Two weeks before we decided to make a run for it, Claude shot himself in the head.

We left Alameda riding three motorcycles in pairs; better maneuverability. We thought it was a fair trade for the lack of armor. The roads were as congested as Claude predicted and if we had been in a car, we would have been eaten. Oakland was still crawling with the infected. They could not talk, all that came out were their tortured screams of pain and rage.

We lost Marian and Chris, when we got to Santa Cruz. We got separated and then they got surrounded. They emptied their guns but were overrun. Frank was a sharpshooter in the Army and shot them both before they could be eaten alive. It seemed a mercy.

Long Beach was our next stop. We thought after five months, most of the infected would have starved, but we were wrong again. We fought against some other uninfected people at a gas station, and attracted a horde of the infected. Linda and Frank held them off until Darren and I could get away. I got bitten right before we pulled off. Don’t know what happened to Linda and Frank but I heard a grenade and saw a cloud of smoke from the roof of the gas station.

We were headed to a military camp set up on the outskirts of Los Angeles. They claimed they had a serum and cure for the infected. I was tired and leaned onto Darren’s back. He was so warm. I couldn’t remember the last time we had eaten.

“Karen, there goes the camp. We’re gonna make it.” Our motorcycle was the only thing moving on the freeway.

“I love you, Darren.” I wanted him to know I appreciated him for taking the risk.

“What did you say?” He glanced to the side for a second. The bite I took tore into his carotid artery and the sweet juicy blood flowed into my mouth. He lost control and careened off the freeway just outside of LA.

Thousands of infected below, hungry, looked up and rejoiced.