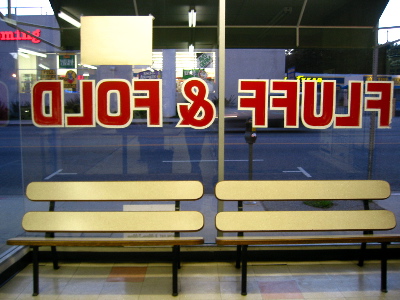 Matthew hated the laundromat. Loud, crowded and filled with people who had strange smells.

It was bad enough to have to deal with his own laundry but the smell of other people’s laundry was something he could barely stand. Adding insult to injury there was an Indian restaurant right next door. The overwhelming scent of curry seemed to sweep into the laundry like a wave whenever the door was opened.

There was something about this place that made Matthew uneasy. Like waiting for a bully to slap you between the shoulder blades with a kick-me sign.

Matthew’s mother and father divorced last year and they sold the house. Living with his mother, Matthew became the ersatz man-of-the-house and needed to help with so many things he didn’t have to do when he was eleven. Now at thirteen, he washed dishes, cleaned up the bathroom and help with laundry chores. When they had a house, they had their own washer and dryer but after the move to the inner city, Mom had to come here twice a month.

He tried telling his mother they should go someplace else, but whenever he tried to explain it, she looked at him, shook her head and gave him her best “therapist face.” The face she reserved for clients who seemed a bit too far gone, but she continued to see them because the money was good. Matt could always tell the clients she liked because she smiled with her eyes at them.

“Now I am going to run some errands in the shopping complex. Don’t leave our laundry alone. When the washer is done, put the clothes in the dryer. I’ll be right back.”

“Who’s my little man?” she smiles and lunges in for her kiss.

“I am. Mom, your embarrassing me.” He pushed her away. She laughed and turned away to run her errands.

From the corner of his eye Matthew saw a blue-green rope pop up out of a washing machine and snatch a towel off the counter. As quickly as it appeared it vanished when he swung around to get a better look at it. It slid back into the washer with the towel. No one seemed to notice anything untoward.

He went back to working with his laundry taking it out of the washer and putting it into one of the mobile baskets used to transport laundry from washer to dryer.

After filling his basket, he waited for a dryer to open up and a few minutes of sitting yielded a dryer near the far end of the laundromat. As he went over to the machine, the Chinese man who was using it seemed a bit reluctant to give it up. He kept shooing Matt away. Matt assumed he wasn’t finished and sat back down. As he was walking away, he saw that same flash of blue-green before the old man put his back to Matt and blocked the door of the dryer.

A few minutes later another dryer opened up but a little old lady beat him to it. He had seen her earlier but she seemed so feeble until it was time to get to a dryer, then she was a track star. No other dryer opened for another fifteen minutes until the light went out on the old man’s dryer at the far end of the laundromat. He didn’t have another basket so Matthew would get close, to beat out any fast grannies, and not so close he would be shooed away.

Then he saw it. In the pile of white laundry the old man was removing from dryer, there was a tentacle, except this time it was white. It handed laundry to the old man and it was coming out of the dryer already folded.

Matt watched amazed as what appeared to be white tentacles, two sometimes three folding clothing and presenting to the old man to put into his little basket with wheels. When he was done, he turned around, smiled at Matthew and pushed his basket past the boy and pointed to the dryer.

Matthew stared at the old man. Not clear what he meant, a dryer opened  in the middle of the laundromat. When the door was opened by a young yuppie listening to a iPod, a cloud of laundry flew out of the machine and landed everywhere.

The old man looked at Matthew. “See, that’s what happens when you don’t have fish.” The old fellow handed Matt a small and dried fish. “Get them from the machine in the corner. This will get you started. If you use that one, it does the best folding in the place. Our secret.”

Matthew went to the dryer and looked inside. He didn’t see anything. Standard dryer stuff. Tiny holes for heat, fins to tumble the laundry. Unsure of how to handle the transaction, he put the fish flat on his hand and inserted his arm into the dryer. Nothing happened. He turned his head away and as soon as he wasn’t looking he felt a cool, silky touch on his arm. It wrapped around his arm and after surrounding his arm he felt the fish vanish from his palm. Turning his head back to the dryer, the tentacle was gone.

Throwing the laundry into the dryer, he closed the door and after putting in his quarters, he looked around and noticed a number of the patrons seemed to have an easier time of things. Their laundry seemed whiter and was easier to get out of the washer. He might see the occasional flash of a tentacle but no one else seem to.

The buzz of his dryer finished and he slowly rose and opened the door. Blocking the doorway like he saw the old man do, the tentacles handed him a shirt, neatly folded. He took it and placed it into his basket. No one paid him any attention. In ten minutes his entire basket was neatly folded.

He walked over to the corner where the old man had pointed and saw a strange vending machine. It only had four icons and a five dollar symbol on it. Matt, took out five dollars and pressed the only symbol he recognized, a fish. Three small hard fish fell into the drop slot.

He walked back to the dryer and put his arm back inside.

Matthew said thank you. The tentacle reached out and closed the door to the dryer.

He didn’t even notice his mother coming up behind him. “Oh, you’ve even folded the laundry and you did such a good job. For this kind of work, you deserve a treat. How does pizza sound?”

“Great. I’ve just got to do one thing before I go.”

He walked over to the young man who had finally picked up his laundry and was about to try a second load in the dryer.

The old woman who beat him to the dryer slid in front of him before he could say anything. “Some people cannot use the fish. He is of an age he cannot believe in things he sees so he cannot see the kami which inhabits this place. Save your fish for your next visit. Keep them dry and they will work just fine.”

“What is this place? What is a kami?”

“Ah, maybe next time. Our city may be crowded but it holds hidden wonders to those who know where to look. Remember, keep the fish dry.”

“Matthew!” he heard his mother cry out. His reflex was to look in her direction.

“Coming!” When he looked back, the old woman and her laundry were gone.

He would forget her admonition and his adventures in the Big City would begin.