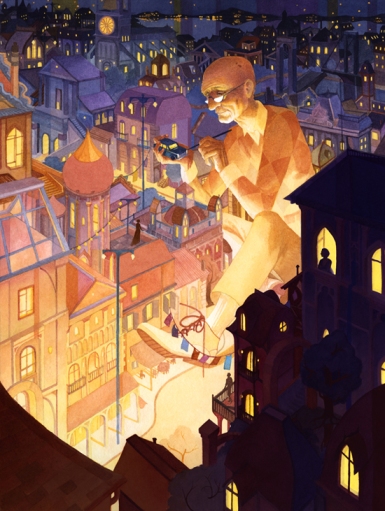 I can still remember him from that Christmas two years ago, sitting in his checkered cardigan with his furrowed brow focused on a car from his underground diorama. He had hand painted every part of his tiny town; each part of it resembled our city of Hamburg, its mixture of buildings, trees, and rooftops.

I loved to go into the basement with him, down the rickety stairs, each creaking with a signature sound, his weight distributed carefully so each bore his weight gracefully. Even at his age, he had refused to use a cane and only lightly did he lean on the railing. Halfway down he had reached up and found the small beaded string and turned on the light over the stairs. Its wan light never lit more than the rest of the stairs into the basement and its hidden treasures.

He would move around in the near darkness and when he reached the far wall, he would turn on a dial and the lights in the city would come on, dimly at first and slowly each building would light up from within. Cunningly crafted the buildings would come alive as if you were seeing the city from above on a summer night. Terraces lit, streets glowing with familiar shadows, cars sitting, awaiting tiny drivers to enter them and drive to their tiny destinations and their tiny lives.

I loved that city. I would walk around it for hours noting every detail, taken from real life. I knew that he did because we would walk during the day together when I wasn’t translating a book for a client. His eye for detail caught everything and while we didn’t talk much, I noted his sharp eyes flickering around the town. He would then come home and paint the dings on cars, the dents on boats, the graffiti on buildings. He would rearrange cars, move his tiny people on the sidewalk cafes, and place gendarmes on different street corners directing traffic.

That last night he was painting a small Italian car, a rich royal blue, his brushes sitting on the table in the living room surrounded by family members who lovingly ignored his eccentricities. He didn’t talk much these days, not since Grandmother died. It was thought he was becoming a bit senile, but I knew better. I spent more time with him than anyone else in our family and though he didn’t need anyone to care for him, I had the time, so I did those little things he needed doing.

I replenished his supplies, kept his clothing up, did his laundry and talked to him even though he never answered. He painted a new car that appeared in the neighborhood and as he finished, he walked downstairs while the rest of the family finished dinner and was cleaning up. He walked by them and smiled, patriarch to an entirely too large and happy family. He took my hand and led me into the basement.

The lights in the city were already on. He walked into the room and gave me the blue car.

“Where was it?” His voice was soft and just a bit tired. He sat in his chair and pointed to the diorama.

I remembered. This was a car in front of the old church, the vehicle of the new bishop. Just a few days in town. He was still parking on the street until a space could be made for him in the back of the church.

“Here.” I reached out and grabbed a small stick and cable device he used to place and move vehicles and dropped it gently in front of the church.

He smiled at me and nodded off to sleep. He died a few days later.

He left me the house in his will to do with as I pleased. I had grown comfortable in the three years I had cared for him and hadn’t been in any hurry to leave. The family even continued to come around for the holidays as if he were still with us, so we continued to celebrate them as if he was.

I hadn’t been back into the basement since he passed away. I was unsure of what to do with his artwork. I resolved to address the work and considered talking to the local museum to see if they would be interested in such a detailed replica of the city.

I had fallen out of the habit of walking since he died and felt a bit guilty about losing touch with the city. After dinner and a couple of glasses of wine, I gathered myself and went into the basement. I expected to see two years of dust covering his miniature Hamburg forgetting to cover it after his death. As I started down the stairs, the door slammed shut behind me and the stairs failed to make their requisite groans as I entered into what was once my grandfather’s most treasured place.

Instead of the mustiness I expected, I found the air clean and cool, as if I had just stepped outside onto the terrace. Then I realized, the lights in the city were already on. I hadn’t even crossed the room yet. Instead of dust, I found the streets clean and in good repair. I saw people standing on their verandas, enjoying the night air.

And then, a blue car drove past me. A foreign roadster passed in the opposite direction. A woman turned and walked back into her house. The cafe owner, carried his chairs into his store and swept his walkway before closing his store.

Then I saw him. He was wearing that same checkered cardigan and white shoes with the dark laces. He was walking down the street with a woman who looked strangely familiar. They walked down the main street and into the doorway of the church. Then they turned and waved to me.

I numbly waved back. They turned slowly and entered the church. Then the nine-oclock bell rang and I could hear it here and outside in the city proper.

I sat and watched the city late into the evening until only the streetlights were left on.

I picked up a paintbrush and touched up a table at the cafe before I went to bed.